When Gandhi was in jail because of his initiative for Quit India movement in 1942 Jinnah was visiting door to door for the membership in Muslim League. The present door-to-door campaign for DDC elections is reminding the same hustle of the 1940s  when League and Congress were deciding the future of people and their chosen ideological leanings. 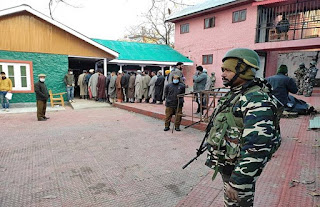 The process is healthy and interesting because people will get to know more about the essence of their vote and its usage. It's further interesting that new and counter-narratives are coming out replacing the old ones.

It has been witnessed in history that the rise and fall of an empire, or a kingdom, or a dynasty is a part of 'dialectic forces', as Friedrich Engels calls It. To be more lucid and clear, if any particular dynasty or individual is ruling on a particular territory, with the passage of time, in that society there will appear some counter forces which will be the reason for their decline.

We can't judge the present DDC politics in a secluded way. As Benedetto Croce, the famous Italian philosopher, historian, and politician said "all history is contemporary history". The developments in the politics of new India have a great impact on the political atmosphere of Jammu and Kashmir. The political parties of Jammu and Kashmir have their own interests like Faarukh Siyyar had at the time of the decline of the Mughal empire.

One benchmark for judging the power structure of state leadership can be the tickets given by parties to their candidates in DDC elections. The tussle between different individuals of the same party for getting tickets and their subsequent resignations for not getting the party mandate is showing how the long-term visions and goals are conspicuously absent.

Furthermore, the tradition of giving mandates to the former MLAs is also witnessing the decline.

The agendas in an appeal for votes is a yardstick to measure the position of a candidate. The agendas of a candidate in Pulwama will be different from the agendas of a candidate in Poonch. Even there cannot be uniformity within a district. Here comes the role of emotional exploitation. The deep impacts of local traditions and history play an important role in the society. By understanding this and with their political experiences candidates approach the areas for the vote and hence they form narratives that will prevail for decades to come (on a sociological level).

Because its first DDC elections in Jammu and Kashmir and Ladakh, it will set the future discourse of the local politics.

Eventually, the same phenomenon would be seen on the local and regional level (of parties). These very elections will decide how the political situation will be in Legislative elections. At this juncture, one is reminded about "the road not taken" by Robert Frost.

The politics of Jammu and Kashmir is at crossroads where many stakeholders are playing their roles.

About the Author: Barkat Hussain Shaheen is pursuing Masters in History from University of Hyderabad. He can be contacted at 8493897080.

Disclaimer: Views expressed by the author are his personal and do not necessarily represent the editorial stance of Pir Panjal Post.