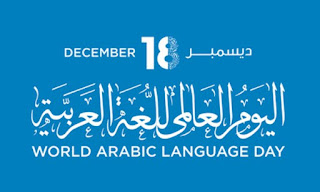 The annual celebration of World Arabic Language Day invites us and offers an opportunity, to shed  light on some important facts. In 1973, Arabic  became the sixth official working language of the  General Assembly of the United Nations and its  main commissions. December 18 is celebrated as  the “World Arabic Language Day” all over the  world as a means to promote cultural understanding and encourage dialogue among people who speak different languages. The event was established by UNESCO in 2010 seeking “to celebrate multilingualism and cultural diversity as well as to promote equal use of all six of its official working languages throughout the organizations”.

The United Nations Educational, Scientific and Cultural Organization (UNESCO) observes December 18 as the World Arabic Language Day every year, honouring a language that is spoken by more than 310 million people around the world. World Arabic Language Day commemorates the role Arabic played in promoting the dissemination of the sciences and philosophies of ancient civilizations.

The Arabic language is a pillar of the cultural diversity of humanity. It is one of the most widely spoken languages in the world, used daily by more than 310 million people. The Arabic language is considered to be one of the oldest and the most widely spoken in the world. Right from the countries in the Middle East to many in North Africa, Arabic is the mother tongue. Arabic is a strongly pronounced language, which manifests in particular in the 15th letter of its alphabet Da’ad (الضاد). The sound does not exist in any other language around the world and this is why Arabic is called the language of Da’ad (الضاد).

In the diversity of its forms, classic or dialectal, from oral expression to poetic calligraphy, the Arabic language has given rise to a fascinating aesthetic, in fields as varied as architecture, poetry, and philosophy. It gives access to an incredible variety of identities and beliefs and its history reveals the richness of its links with other languages. Arabic has played a catalytic role in knowledge, promoting the dissemination of Greek and Roman sciences and philosophies to Renaissance Europe. It has enabled a dialogue of cultures along the silk roads, from the coast of India to the Horn of Africa.

Muslims and the Arabic language

The word “Arab”, means “nomad”, hinting at the language’s roots in the nomadic tribes of today’s Arabian Peninsula. Most of our knowledge of classical Arabic comes from the Holy Qur’an. The scripture is the first major record of the written Arabic language and provides valuable insight into the structure of the old language. Today, over one billion Muslims study Arabic to read the Holy Qur’an in its original tongue. Arabic plays an important role in the Islamic faith because Arabic is the language of the Holy Qur’an. Muslims holds the importance of the Arabic language in very high esteem with most of their beliefs being inseparable from Arabic. Muslims consider Arabic the divine gift and a sacred part of their customs.

Countries where the official language is Arabic:

Rich Cultural History of Arabic on the World

Arabic has influenced many other languages around the globe throughout its history. Arabic speakers have played instrumental roles in the development of mathematics, chemistry and medicine. Medieval Europeans brought back knowledge from the Middle East and North Africa, helping to bring Europe out of the Dark Ages and into the Renaissance and the Age of Enlightenment.

Arabic is one of the oldest in the world with a wealth of knowledge that Archaeologists’ to this day are still trying to uncover. Arabic has roots going back as far as the sixth century. The Middle East has a rich storytelling history and has produced some of the most memorable stories such as the Arabian Nights, Ali Baba, and Allaudin etc.

Arabs have also made significant contributions in:

India has been one of the significant centres for the study of Arabic Language and Literature since the early medieval period. And it has a wonderful impact on various Indian languages and literatures. After the independence, the new socio-political changes and the strategic significance of the Middle East and Gulf Countries enhanced the interest and scope for the study of the Arabic language and literature. Moreover, as an old, rich and internationally acknowledged language, it is contributing significantly to the discipline of Comparative Literature also.

Arabic is truly an amazing language to learn. Studying Arabic could be the best decision we could ever make!

About the Author:  Dr. Bilal Nabi is working as an Assistant Professor of Arabic Language & Literature in Srinagar Cluster University, Srinagar (J&K). He can be contacted at bilalnabishah99@gmail.com.