Geo-tagging the assets of MGNREGA: A step towards transparency and accountability | Ashiq Rafiq

Pir Panjal Post June 01, 2019 Economy Opinion Society World
Mahatma Gandhi National Rural Employment Guarantee Act (MGNREGA) enacted in 2005, aims to enhance the livelihood security of rural people by guaranteeing 100 days of wages in a financial year for adults willing to take up unskilled manual work. This initiative is unique of its kind across the globe in poverty alleviation.

On an average, about 30 Lakh Assets are created annually which includes a variety of works such as water harvesting structures, plantations, rural infrastructure, flood control measures, individual assets for sustainable livelihood, community infrastructure and so on. The process of geotagging is going on and all assets under MGNREGA will be geo-tagged. Convergence with other schemes necessitates further transparency in database creation of MGNREGA assets.

Geo-tagging is a process of adding geographical information or identification such as latitude and longitude to various media such as photos or videos. It helps users to find a wide variety of location-specific information from a device.

Geotagging of assets created under MGNREGA was started for online recording and monitoring of assets to check leakage. Subsequently, on June 24, 2016, the Ministry of Rural development signed an MoU with National Remote Sensing Centre (NRSC), ISRO and National Informatics Centre to geo-tag MGNREGA assets.

How does it work?

The NRSC developed the Bhuvan geo- portal app, a mobile-based geo- tagging application for the MGNREGA scheme. Within a short span of period, the ISRO’s Bhuvan app was linked with ‘NREGA-soft’, an interface operated under DoRD by National Informatics Centre(NIC) and enabled access to state implementing departments.

‘Geo-MGNREGA’, as geo-tagging of assets created under MGNREGA is known, involves generation of an asset ID on the NREGS Soft after completion of work and marking it as a primary asset by the programme officer or the Gram Panchayat.

An asset may, however, have one or multiple (completed) works associated with it. In such cases, the ID of the primary asset is used for referring to the associated works.

Geo-tagging of completed assets is done through the Bhuvan mobile platform, which involves capturing of GPS location of the assets along with photographs taken by the MGNREGA Spatial Enumerators (MSEs).

Usually, Gram Rozgar  Sahayakas(GRS’s), Technical Assistants(TA’s) or any other functionary at the Gram Panchayat Level are designated as MGNREGA Spatial Enumerators(MSEs). Validation of data collected is done by the Officers at the block level known as GIS asset supervisors. The data collected is then approved by a state nodal officer and then registered on the Bhuvan portal and displayed on its web platform in the public domain.

As it stands, it is mandatory for the states, and the union territories have to ensure that whatever work is completed with effect from 01st of April 2017 must be geo-tagged within 30 days of completion of works.

Adding to the transparency, the Ministry also launched ‘Janmanrega’, which is a citizen-centric mobile application (downloadable from play store). This application enables a citizen to locate the geo-tagged MGNREGA assets on the Bhuvan Map Interface along with their attributes and photographs using an Android mobile phone and also provide his/her feedback on any assets based on user’s current location.

The Government’s commitment to transparency through technological intervention has ensured that very asset under MGNREGA is now promptly geo-tagged and available in the public domain for scrutiny.

All works are monitored by geo-tagging- before, during and after completion to ensure full transparency in all the works.

In addition to ensuring transparency in a system prone to leakages, the Geo-MGNREGA platform is now used for efficient planning of works on a particular site as well as avoiding duplication of works while preparing labour budget.

Different Government departments such as Forestry, Tourism, Archaeology etc. are also making good use of this technology.

It is pertinent to mention here that Geo-tagging has not been started in schemes like Members of Parliament Local Area Development Scheme(MPLADS) and Member of Legislative Assembly/Council Constituency Development Scheme(MLACDS/MLCCDS) that enables the Member of Parliaments(MP) and Member of Legislative Assembly/Council(MLA/MLC) respectively to spend crores of rupees from these funds for developmental work in their constituencies with an emphasis on creating durable assets based on locally felt needs. As and when the geo-tagging shall be started in these schemes, it shall ensure full transparency and shall make MP’s/MLAs/MLCs more accountable while utilizing these funds for developmental works. 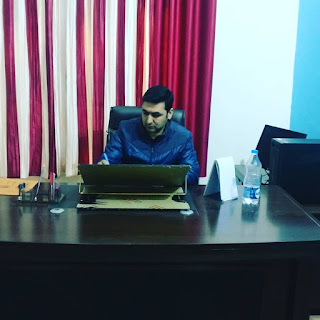 About the Author: Ashiq Rafiq Malik (KAS), is presently posted as State Taxes Officer, Circle Poonch. He has also served as BDO in RDD.