Pir Panjal Post March 31, 2020 Art Education Society
She came neatly combed , a little heavily powdered, in a green salwar. A house maid,  the man who brought her, had tutored her pretty well how to encash our need for a maid.


I thanked the man meekly. “she is poor, but a good worker. She has to take care of two daughters; neither she has a husband nor family ,he said. Is the story any different for a maid? I thought without  reacting.
As  we  agreed on her, like a regular maid she checked the number of rooms, people in the house and briefed me about her schedule and conditions. I was neither happy with her nor the ghetto she came from. Even after she left, I couldn’t help thinking of her. A little stylish for a maid. And her loud voice which did unsettle me a bit. I was also alittle intrigued with her looks . She was young medium built , but she had lost her teeth in the front row! That had pulled her cheeks low in an awkward way.

Days passed, whenever I  got to be at home, I would sit in the kitchen conversing with her,only a pretext to monitor her work.
On one occasion she said. " It's boring, I have to cook for my self, atleast if I had kids  I would have reasons to cook, God was not kind enough to bestow me kids".
“Don’t you have any kids? But you had said you have two daughters!"  I said
“They are  my sisters".
A flicker of doubt crossed my mind about her honesty.
She always tried to engage me in some talk, ask me about my home and family. But I always answered her reluctantly, maintaining a distance.

Another day as she was scrubbing the vessels in hurry. I  asked,
"What happened to your husband?"
“He left me”, she said quickly.  “But he visits sometime”.

Earlier it was about her daughters and now her husband! Nothing was clear about her , though I was not interested with her life, I was only checking on her  background, to understand her  sarrounding.but nothing seemed satisfactory.

She was very particular about her pay always and would remind me a day in advance. “what do you do with this money, you work in another household too, you should be making some money.”
“I should pay the society” she said.
Society? “ The society from which I borrowed a loan of fifty thousand, I need to pay the interest”.

"Fifty  thousand! Why?” I couldn’t hold back my curiosity.
“I borrowed when my mother was dying. We are three daughters; one is married but lost her husband and has to take care of her two daughters. Another.... has lost her mind… it was on me.
"How could I leave my mother to die? I borrowed for her treatment, but still couldn’t save her.”
"If I don’t pay interest on time, the women from the society will  shout on the street and the neighborhood would watch. My mother left behind a roof for me; I can starve but can’t stand a humiliation”
“Thank God, at least I have a roof. Though I am deprived of husband and children” she sighed.”

I was wondering at her self esteem and the way she spoke.
Why don’t you go to your husband? Why doesn’t he live with you?
“He lives with his brother, his sister in law is more important to him. He wants me to stay in his brothers house and do whatever she asks me to do. I don't like her. She never treated me well".
“I don’t know, he liked better there. Whenever I asked him to stay with me, he always said , he cannot leave his brother. He doesn’t have a regular job, except helping his sister in law.
"He drinks a lot, I don’t like that. If I asked him not to , he would beat me badly, And she would blame me for everything".
“See he broke all my teeth”. He kicked me. She said projecting her pugged  jaw..
"He would always beat me for no reason, and accuse me for everything."
"He would pick up  quarrel, beat me ruthlessly, kick me like an animal, and would leave while the whole neighbourhood watched. At times he would lock me inside for days."
"He would take away all my dress and leave it in the neighborhood. He did not like me well dressed, wearing flowers are talking to neighbors. He left me like these unscrubbed thing."

He returned only after a day or two, and the same thing would follow .she said, looking at me with a forced smile on her face.

I could not watch her bruised smile.
That sarcastic smile on her face pulled down the judgmental mask off me.
I sat quiet with my thoughts wandering over many things, at the same time wishing not to hear more of her story, but...
I couldn't take more of him, after my mother's death. The village elders broke our marriage. I wanted it  all to end,  with that my sufferings too.

I removed my 'mangal sutra'.
But he still comes once in a while for food and money.
"That's it?"doesn't he feel anything for you. I mean....does he stay " I interrupted.
"No, he hasn't changed. I cook for him when he comes and I cannot deny food" She looked straight at me.
As I was wondering what this relationship is all about?
I wish he was dead, she said flatly.
"What?" I asked in disbelief.
With a big smile on her face, scrubbing the plates she said ,"people say I would get a widow pension. I don't have even that benefit".
You should have divorced him I said. This word divorce sounds so glamorous these days I thought.
“I don't want to be called a divorcee" she immediately refuted.
"You should have married someone."..
"How old are you?"(I was always curious to know)
"May be around thirty five. I will die like this but never marry again." She said.
“Why should I remarry? I already attained my menopause too, so early of my age, do you believe? " I won't be able to have kids. Then why should I marry. I have no interest in other things", She said dropping the bowl she was scrubbing.
I wanted to stop the conversation somehow. I couldn't take more.
Next day she came with some 'prasad' and flowers from a temple and said "take .the 'Kunkum' and flowers, its very powerful
"Is it?" I smiled. She had applied a lot on her forehead.

I sat with a cup of tea.
Some men are good like the old couple in your neighborhood, he is so patient isn't he?
I laughed loudly, understanding what is running on her mind.
I said," maybe he is used to it! More over what is the point in separating them at this age? Isn’t it." I said still laughing.
I was sipping my tea.
A throb broke the silence.
I looked at her raising my brows
Rather slowly she said" I have only one wish, poor woman my mother too had the same about her,  I should die not a widow but a 'Muttahide'(Suhagan)", "that man should live long at least for this wish of mine" this has been my only prayer.
All my expressions freezed.
She was waiting for my response...
I walked out for a breath of fresh air. 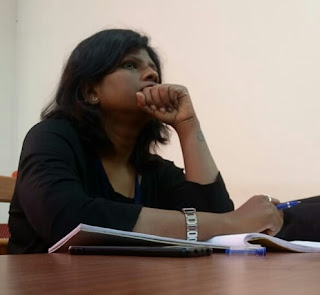 About the Author: Rani Rathna Prabha K. V. is an English poet. She is an Assistant Professor of English at Government First Grade College Sirsi, Karnataka. She's an alumnus of Bangalore University.