Pir Panjal Post May 30, 2019 Opinion Politics Society
It is s simply unfair to blame Rahul Gandhi for the abysmal and dismal performance of the INC in the recently concluded election to the Lok Sabha.

We must not forget that in 18 States and UTs, Congress explicitly failed in opening its tally whereas 9 former CM's of the Congress also lost the road to Parliament. One shouldn't forget that Elections aren't won by merely on the name of the personality cult but a strong organisational structure always provides the requisite support beside it energise the workers on the ground too.

In the recent loss for Congress, there are various reasons that can be made responsible for the defeat of INC but above all, blaming Rahul Gandhi for this devastating defeat would absolutely be unjust and unfair and it would simply be an escaping route from the facts and realities. Before going into the details of the electoral failures of Congress, we must not forget that our composite society was badly polarized and bifurcated across many lines.

Earlier, elections were somehow fought on the developmental issues but this time the ruling regime successfully diverted the entire debate across National security, Nationalism and Patriotism, on the other hand, Congress failed to highlight the failures of the present government convincingly at different platforms if there were any.

Modi's charismatic personality, speaking skills and media management were obviously some strong reasons behind his mammoth victory. Congress, on the other hand, falls short of a strong organisational structure, few of their top old brass even declined to contest election fearing humiliating defeat and few veterans seeking tickets for their kith and kins ruined the party internally.

What's the role of those 18 State Units and their heads where Congress not even managed to open it's account and will it ever be justified to blame Rahul Gandhi when 9 of the former CMs not able to hold on to their constituencies.

Not only at the State level, but even at the district level too Congress has a rift in the party, one group always works against the other and ultimately party suffers due to their own petty interests. On the other hand, Congress leadership is categorically failed to recognize the true and dedicated workers on the ground, the divided camps and factions always push forward their own agenda and interests instead of the party.

Weak state leadership, poor election campaign, divided workers and management also proved to be the fundamental reasons behind Congress party's poor show, the party organisation is in a mess in most states while its leaders mostly battling for existential crises. On the other hand, Congress along with other opposition leaders were hoping to put up a Mahagathbandhan and make 2019 a straight contest against the BJP. However, despite several rounds of talks it failed to stitch an alliance with the Samajwadi Party-Bahujan Samaj Party in Uttar Pradesh, Mamata/Left in Bengal, Aam Aadmi Party in Delhi, TDP in Telangana/Andhra Pradesh. It even failed to keep some smaller parties led by Prakash Ambedkar happy in Maharashtra. Prime Minister, on the other hand, termed MahaGathbandhan as Mahamilawati Ganthbandhan and that was truly catchy and had it's due impact too.

Congress also failed to raise the issues like unemployment, inflation and farmer distress but relied more on Rafael issue which hardly effects common man's life. Priyanka Gandhi Vadra's entry into the party wasn't a bad idea but she could have played a much better role in South India and other parts of the country instead of Eastern UP only where she was badly challenged at two fronts by BJP and BSP/SP alliance.

Anyhow, Congress's survival is necessary for Indian democracy as an effective opposition would always be required in a democratic setup otherwise arrogance may prevail and the result can equally be devastating too. Couple of things Congress leadership must look into at the earliest, those leaders who aren't effective in their home states or avoids contesting elections and finding a safe route to Rajya Sabha must be made accountable and young faces must be identified on merits and if they are capable, they must lead otherwise must pave the way for fresh blood and energy.

Disclaimer: The views expressed by the author are his personal and do not necessarily represent Pir Panjal Post's editorial stance.

About the Author: Khalil A Banday is the Chairman of APJ Abdul Kalam Human Welfare Foundation and a Teacher in J&K Department of Education. He can be contacted at khalilbanday@gmail.com 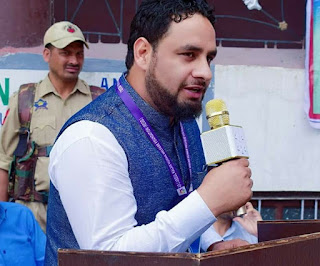