Society, migrations, values and intervention of technology in rural areas of Pir Panjal

The foundation of modern society is based on technology and related aspects. In other words, the concept of modernity has its connection with the level of technology in which society is operating. In the recent past we have seen some deep changes in the rural areas of Pir Panjal (Poonch - Rajouri), which are somehow connected with technology. The intervention of this can be seen on multiple levels and aspects.

Because of its terrain, villages of Pir Panjal were never connected with towns, as there were various geographical barriers. Due to this, the society and culture which flourished in villages was independent of towns and cities.From 19th century to late 20th century the possible connections of the rural areas with towns were limited to official works (mostly revenue), emergency hospitalisation and police inquiries. From the 1990s to late 2000s militancy further minimized the movement of the rural population . People of villages were reluctant to visit towns because of multiple military checkpoints, psychological torture and rough paths. In the past few years the militancy has decreased and this has paved the way to establish new connections between rural and urban areas. New ideas, values and technological patterns were exchanged.

One important aspect was migration of families from villages towards towns to harness new avenues and opportunities. The vacuum created by inadequate infrastructure for agriculture and industry gave rise to the service sector. Basic education was only available in towns and people migrated towards towns. This led to the intermingling of rural and town populations on multiple levels. New languages were learnt for formal and official communication. In this way a new cosmopolitan culture was developed on a small scale where mutual respect for neighbours was ensured through Islamic values and teachings but in later times all these aspects were destroyed by narrow and short term political interests of a few families of politicians. In the present context things are changing because of education, awareness and social media where the scrutiny of facts can't be hidden. In rural areas all those people who had migrated to towns and cities reconnected with their villages in a new way and with better approach.

Connectivity and mobility helped the people to connect with rural areas with a nostalgic approach. The connections and deep rooted attachment of childhood contributed to rediscovering the rural area where peace, tranquility and nature were all fitted together.

With the coming of social networking and multimedia, ideas and comprehension capacity of minds started getting influenced like never before. Traditional values, concepts and beliefs were scrutinised in a critical manner. There never happened a scientific revolution in Indian societies in general like Europe except some reform movements where thinkers were influenced by the scientific wave of Europe.In case of rural villages of Pir Panjal, influence of beliefs, myths and superstition was profound because of a long tradition of past where storytelling and legends are part of day to day life. But the dawn of technology gave access to people where prejudices and presuppose truths were exposed and a rudimentary level of scientific intervention happened.

The concept of modernity was challenged at least in the minds of people. Rural folks who were feeling inferiority Complex experienced new avenues and institutions like universities where debates and opinions on global to local level were accessed by students of rural areas in Universities, where they scrutinised the prevailing notions and customs of rural society.

The claiming of spaces by rural communities in mainstream society is the story of struggle, competition and hope. These trends of competition in the societies are beneficial and healthy. If intervention of technology is used to examine the wrongfulness of the past then a bright future can be hoped. 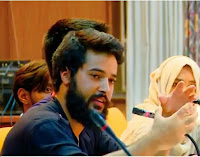 About the author: Barkat Hussain Shaheen is a research scholar from University of Hyderabad. He can be reached at hbarkat80@gmail.com