Knowing about Diversity and Difference: A Way For Peace | H. Vageeshan

Pir Panjal Post December 21, 2019 Culture Education Politics Society
Peace has many facets so does violence. Enhancing peace and reducing the chances of violence can be deemed as one of the eternal virtues of human living. One important way to have some peace is to understand diversity and difference and not to despise it as a negation of homogenization. Thus learning about diversity and coexisting with differences and not turning differences in to rivalry and violence is one important lesson to be learnt by many and especially by the young minds. Comprehending diversity and difference properly has a high potential to enhance mutual respect. Developing proper insights in to this reality of life contribute to the quality of empathy. Understanding and engaging with circumstances and people in diverse and different conditions helps one to move out of the box and think freshly and critically about life.

Diversity is the essence of life, be it with the inner life of an individual or with the relations external to one, individual has to accept and deal with diversities. At a biological as well as at sociological level existence of differences or diversity has to be accepted as a norm. Differences often are conceived as distinctions of power. There is a tendency in society to construe the distinctions as hierarchies of high and low.

Though each distinction has its own significance, uniqueness and utility the sense of superiority and inferiority are fed in to human mind to treat certain differences in a condescending manner. They range from sex, skin color, race, religion, caste, disability and the ilk. Learning to comprehend diversity and difference with a sense of oneness with the other, responsibility and respect requires training and also conducive social atmosphere which gives importance to accommodation, freedom and equality. When the hierarchical constructs of high and low are normalized and entrenched in to the minds and social practices, compounds and cements the structural violence of the so called ‘high’ over the constructed ‘low’. People in such a system believe that it is natural to deal with those distinctions which are believed to be low, week and marginalized either with patronizing attitude or with crude harshness. Suppressing the voices and choices of the marginalized will be considered order of the day and also a natural phenomenon.

Feminism and environmentalism emphasize the principle ‘Different but Equal’ to do away with ‘andro centric’ and ‘anthropocentric’ world views respectively. Both the world views tried and trying to sensitize people to understand the difference and respect them with equality. Feminism addresses the question of dignity of every human be whatever may be the individual’s sexual orientation and gender perception. Ecologism goes a further and opens the minds to think about the symbiotic relationship between the human, non-human life and nonliving nature; it emphasizes the complex relationship between seemingly apparently unconnected diversities.

Generally human minds are trained consciously and unconsciously to respect homogeneity and unification of homogeneities and take pride in them. But that is only one facet of collective living many a time brushes the realty of diversity and difference under the carpet. Over emphasizing the essential worthiness and inner strength of homogeneity often feeds into to a ‘Culture of Othering’ which has a strong tendency to turn in to toxic hate of the other.

The reality of the collective living is not much about creating a monochromatic homogeny but to know and understand the diversity and difference. Instead of looking for similarity and absolute like mindedness and living only in the confines similar likeminded cohabitants, one has to practice to respect the differences. Here one has to keep in mind that respect is way greater than tolerance in quality and depth. The spirit of accommodation, cross learning, mutual respect, reciprocating positivity are possible by dwelling deep in to the core values put in to debate by Feminism and Ecologist.

Young minds from their early age have to be given inputs in a methodical fashion to understand the importance of diversity, difference and marginality and to deal with them productively. Teachers thus must focus themselves on understanding diversity, difference so as to negotiate with their students in to the journey of becoming more accommodating and understanding individuals contributing to peace in its wide sense and also to turn in to global citizens striving for global justice. 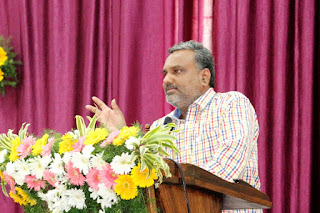 About the Author: H.Vageeshan is a teacher of Political Science In NALSAR University of Law, Hyderabad ( Deccan),Telangana. He is interested in the arena of teaching and learning process, development studies, decentralized democracy, and empirical social science research. He likes reading books and meeting people and penning poetry. He is born in 1971.