Pir Panjal Post December 05, 2017 Culture Economy Education J&K Pir Panjal Society Zed
Towseef Ali Malik aged 23 years hails from Marwah valley of Kishtwar district. Marwah valley is blessed with a heritage of natural beauty, but is equally neglected area on developmental front.  Marwah Tehsil comprises of two blocks, Marwah and Warwan and these areas are deprived of all basic amenities of life, as it lacks electricity, telecommunication, transportation, and proper health and hygiene facilities even in this modern era of science and technology.

Towseef was born in a poor family in Yourdu village of Marwah tehsil. Towseef was a very bright student from his early school days. When he was studying in 11th class, he lost his father and the whole burden of his family was laid on his tender shoulders. It was a very tough time for him as apart from studies he had to fulfill his family needs as well, therefore he started doing part time job like farming and daily wage works in his village.

The thirst for science and innovation kept Towseef moving despite facing so many challenges. He was interested in innovations from his childhood as he was able to make small hydropower tubine when he was a student of 5th standard .He also made various designs of Hake stick, DC battery Gittar, Cotton machine, small gas solder, etc. but he was not able to move ahead with these designs due to poverty and lack of exposure. During all these years he met many people for guidance but he was not able to get a permanent guidance which left him discouraged.

Towseef is blessed with natural talent, as apart from innovations he was interested in poetry as well, so he thought of to try his luck in poetry. When he joined Govt Degree College (Boys) Anantnag for his Bachelor’s degree he started participating in various poetry seminars and due to his inherent talent he was made assistant editor for Kashmiri section of the college magazine “Verinag”. It was only during his college days, he met Prof Barkat Nida and he shared his scientific ideas with him. Towseef considers Prof Barkat as the messiah who understood and appreciated his scientific acumen and supported him wholeheartedly. Prof Barkat accompanied Towseef to Kahmir University where he introduced him with experts at GIAN CELL and followed by National Innovation Fund (NIF) Ahmedabad. This was the turning point in his life as he was able to kick start his scientific career afresh. Towseef send a project proposal on “Multipurpose room heating appliance” which was later accepted by NIF at the 17th scientific conference. 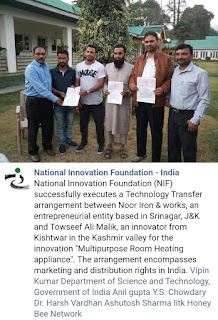 After that Towseef was invited at GIAN CELL Kashmir University to give a presentation about his innovation in front of a committee of experts from NIF, which included Dr Jasmin from USA, Dr. Venod and chairman GAIN CELL. On the recommendation of the experts, Towseef created a prototype of his innovation, which was successfully tested by National Institute of Technology (NIT) Srinagar. Finally after a long trail of 7 years the marketable product of his model was made by NIT Srinagar in collaboration with Towseef, with NIF as the funding partner. Towseef’s innovation namely “Multipurpose room heating appliance” was accepted for patent vide patent application no. 201711035536 filled under the Indian patents Act.1970. This multipurpose heating appliance has some unique features such as it can maintain the room temperature upto 43 degree Celsius, can be used to boil water in tanks,  it can used as motor to lift water to several meters. According to NIT report this machine can work for 8 hrs by using only 3 kg of wood, therefore it is very economical as well.

Recently, NIF successfully executes the Technology transfer deal between Noor Iron & works, an entrepreneurial entity based in Srinagar and Towseef Ali on 5th of October 2017 for this unique innovation, “Multipurpose Room Heating Appliance”. Presently Towseef is pursuing MA (Urdu) through IGNOU. Towseef considers his later father (Gh Ali Malik) as his role model, for he used to tell him that,” Son try to set an example for others to assimilate and don’t be satisfied with a success alone”. Towseef’s life is indeed an inspiration to millions of other youths from downtrodden societies and neglected areas and i wish him all the very best.