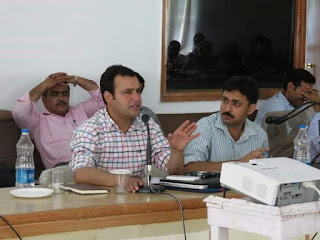 The development never comes alone as it brings with it a destruction putting the future of planet at stake. The alluring urbanization endows a sensation of satisfaction to a larger section of the society but unfortunately we fail to become conscious about the future. Destruction has already knocked at the doors but it’s a high time to realize and analyze the role of the society to minimize its effect before it’s too late. The Pir Panjal region is nowhere unharmed and untouched from the wrath of the destructive development. The historic Mughal Road, the long awaited alternative mode of transportation connecting the Kashmir Valley with the rest of the country via Pir Panjal Region infused a hope for fresh avenues for the socio-economic reciprocation. The 84 Kms long road, passing at an altitude of 11,500 meters through the Pir Panjal mountainous range, emerged as the tourist spot for the people. Traveling through the Mughal raod, endows a blissful sensation to the voyagers.

But another side of the picturesque view is horrible. More than 6700 trees/poles of different species and dia-classes were fell during the excavation and the user agency was bound to pay Rs. 2.58 crores on account of the compensation for the same. Moreover, Rs. 47.6 Lakhs were also paid on account of the compulsory afforestation to be carried out in 264 Ha. As per the Supreme Court order dated 30-10-2002 in I.A. No. 566 in Writ Petition (Civil) No. 202 of 1995 T.N.Godavaram Thirumlakad V/s Union of India, user agency was also bound to pay an amount of Rs.  913.16 Lakhs for the Forest Land measuring 132 Hectare as accessed by the DFO Poonch as per the Supreme Court order. 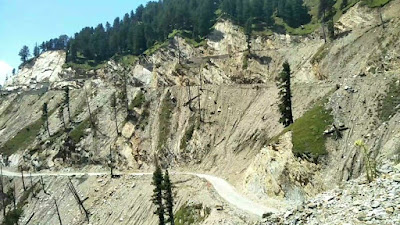 During the construction of the Mughal Road, the user agency utterly ignored the damage caused to the ecology and environment. The total stretch of 84 Kms comprises of 35 major and minor landslides. As per the Govt. order no. 388 FST of 2005 Dated 29-09-2005, the user agency would construct complete retaining walls on both sides of the road and take necessary steps so as to minimize the soil erosion/land slips. The frequent landslides at  different places has caused major damage to the ecology and environment  Moreover, blockades of the road impedes the vehicles and add to the miseries of the people and traps the passengers in particular.

During the mass excavation of the Mughal Road, more that 2400 trees/ poles including top broken, half broken, uprooted trees of different species like Deaodar, Kail, HC Nut, Rubinia & Ulmus etc. were damaged as reported by the concerned forest authorities. As the Govt order no. 388 FST of 2005 Dated 29-09-2005, “Any damage done to the forest by the user agency or it’s employees and contractors or people employed by them shall be charged from the user agency at the rate of ten times the standard rate of 1992.Accordingly, the DFO Poonch issued the several damage bills to the tune of Rs. 4.17 Crores from the year 2007 to 2012. But the height of negligence is that, user agency had not remitted any such amount till date. Simultaneously, it’s utter negligence on part of the forest department which failed to recover the huge amount. Merely, serving notice to the violator doesn’t fulfill any purpose and forest department can’t run away from its official duty. The forest department played the role of a mute spectator and the user agency was encouraged to cause more damages which could have been stopped at the earlier stage. 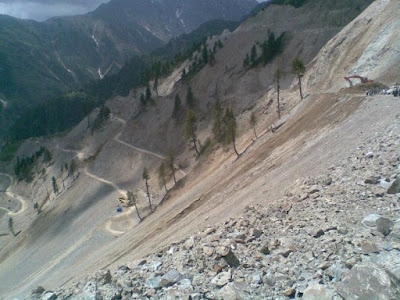 The construction of the road involved huge cutting & blasting of the rocky strata of the fragile ecology resulted in degradation and denudation of the area. Technically, the debris derived after the cutting and blasting of the rocks had to be transported and dumped into the identified barren gullies. But the debris was released alongside the road, resulting into the major damage to the ecology and environment. The absence of the proper measures to protect and preserve the ecology and collective negligence of user agency and the forest department has put a question mark on their intentions.

As per the claims of the forest department about 8 closures were established at Mughal Road during the year 2013 to 2016 at Godaban, Mansar, Chhata Pani, Near Er, Younas Memorial, Panar, Poshana, Dogrian achieving the financial target of Rs. 73 Lakhs, including plantation, fencing, SC work, crates, patch sowing, dibbling etc. But the picture on ground narrates a contrast story. The survival rate of plantation and absence of appraisal report gives us a reason to raise a finger at the forest department. The figurative claims of the forest department fail to prove physical achievement, if one visits on the ground.

Timely intervention of the government and other concerned authorities may prevent the further damage to the ecology and environment. The recovery of the damage caused by the user agency and negligence shown by the forest department must be taken into account and strict action must be initiated against the erring officials. The development is good only if it is brought in tune with ecology and environment, else nature has its own course of action which will it in reimburse in its devastating way.

Ayaz Mughal is a social activist and Chairman of  Awake India