A Story of Bumpy Bus Rides of Himalayas | Ajaz Ahmad

Engine-powered transportation was a paradigm shift in the history of transport and travel. With the innovations in technology, new forms of transport, faster than before, started rolling. Newer the technology, faster the speed. Among these all, there existed a wood and iron lumbering structure called a Bus. Easy on pocket, heavy-duty, albeit very slow, it ruled most of the regions of South Asia and played an exceedingly significant role in providing the last-mile connectivity. 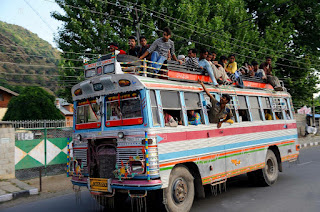 Being a resident of the least developed region of Pir Panjal, I witnessed the bumpy yet amusing rides of such local buses throughout my childhood, since these were the only mode of travel. In the late 90s, when the rest of the world had left the usage of supersonic Concorde planes, these buses here, were still very slow, slow as a snail. So slow that angry young men lunged to board them while they were in their full-throttle, hanging from the doors or adventurously riding the roof.

Conductors of these buses were always in a hurry, banging the boarding doors, attracting every passenger to experience their ‘fancy but unpleasant rides’. Before leaving the Bus-stop, chaos was the norm. People trying to figure out their seat numbers. Few arguing with others to recheck their numbers, a few requesting for a seat exchange giving unearthly reasons. Excited children yearning for window seats unaware of the vomitous journey ahead and ignorant of the fact that they would land in laps of unrelated uncles and aunts. Pitchman selling orange-flavored candies, wallets, sunglasses and coconut slices. Paupers begging for any possible help. Clergymen asking for donations, holding an age-old laminated paper with some sermon written on it. Goat kids bleating underneath seats. Roosters put in polythene bags with their heads kept out through a narrow hole for already-low oxygen.

These buses were squeaky and full of clatter, all thanks to the bumpy roads. When the mountainous roads ascended a narrow and steep gradient, the bus plodded tiredly even as the driver pushed the accelerator with all his might. The tender breeze on the mountain slope waved inside the black smoke exhausted by bus which made people highly nauseated. Few children and women used to vomit with heads strained out, because they were not frequent travelers as the men were.

When I recall these experiences, I find myself seated on the rearmost seat struggling with legroom while an old man sitting beside me is complaining about my manspreading.

The waiting passengers heave a sigh of relief when the driver jumps in through the stained 'Pilot door'. After a quick wiping of the windshield with a dirtier cloth, the driver starts the bus and leaves the bus station. However, even after departing, the already jam-packed bus languidly travels at a snail’s pace for a few hundred meters to get in few more passengers, while the conductor animatedly calls out the names of the places en-route. When the bus gains momentum, the conductor jumps in all of a sudden showcasing his mastered-over-the-years skills. He does this knowingly to lure the women of his age. Children look at him hypnotized with his skills, thinking, how on earth does he keep his balance without holding anything? The standing passengers try to imitate him but fail dejectedly. 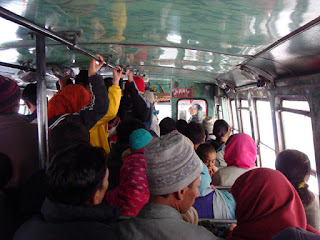 While a young girl looks at the first-aid box wondering what could be in there, the conductor opens it and takes out his fare-collection bag. The conductor changes his colors from being a polite guy at the bus station to a rude man when the bus leaves the station.  People expect him to be nice but he abruptly jumps into a heated argument if someone fails to give one rupee extra. After a heated exchange of words, the rest of the passengers come out in the support of duped passenger and then at the end, every single of them, ridicule the conductor for his ‘rude’ behavior. More often than not, it is the conductor’s show in the back of the bus as the driver minds his own business by steering that extremely heavy wheel. He rarely pitches in unless the argument prolongs.

Leaving behind the hustle-bustle of the town, the driver feels the urge of music. He is habitual of changing the audio cassette or turning-on the music player placed above his head without giving it a proper look or else the bus may run in a deep gorge or collide. While a teenager catches glimpses of mountains and rivers from the window seat, the melodious voice of Kumar Sanu’s ‘Tumhein dekhein meri aankhein, iss main kya meri khata hai’ striking his ears, comforts him in weaving his dreams with his beloved. He finds solace in this, expecting this journey never ends. But, to his alarm, the conductor shouts the name of his destination and he needs to alight, woefully. The older generation shares a common rant on the choice of music being played.

The bus is crowded and jam-packed with no wiggle room. A vernal boy leaves his seat for a standing woman out of respect while few others are doing this just to ingrain their acquaintances in the bus proving chivalry is not dead after all. Some carefully ignore those standing, so as not to ruin their journey. Some pay the fares of others, some contently enjoy the free-ride.  Bus gains speed, conductor shouts for a possible commuter standing alongside the road, driver hits the brakes suddenly, standing passengers go flying dictated by the inertia. The children enjoying the show, the adults cursing the driver.

Though those buses are history now, chaos and bad roads still refuse to leave the less-developed and least literate region of Pir Panjal. Bad as they still are, full of potholes, the Pir Panjal roads continue to be a stubborn deterrent for the drivers and passengers alike. With the coming of more advanced designs of public vehicles laced with sophisticated features and passenger-friendly layout, those buses slowly rolled away. On the other hand, with the increase in the purchasing power of locals, a sizeable chunk of Pir Panjal population now owns cars but public transport continues to ferry the majority of passengers. 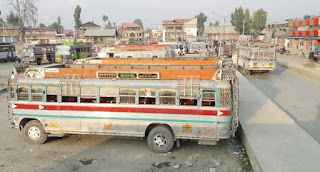 With the inception of PMGSY in late 2000, people started 'civil war' at the village level, denying the construction of roads through their lands. They agreed to provide a narrow stretch of their land if some sort of compensation is given by the authorities. This resulted in the construction of narrow roads, narrower than ever, to improve connectivity. The beautiful mountains got ruthlessly speared by the excavators where the whole population of the village gathered to enjoy JCB ki khudai. Even the alternatives of those buses found it hard to ply on these constricted roads. Then came their Swift and furious juniors called Tata Magic, which are catering to the transportation requirements of locals, treading the rural roads. These tiny creatures have their own story. 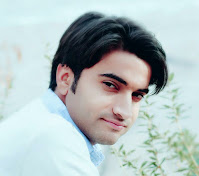 About the author: Ajaz Ahmad is an amateur photographer. He works as a teacher in Jammu and Kashmir School Education Department.  He is the co-founder of Pir Panjal Post online portal.