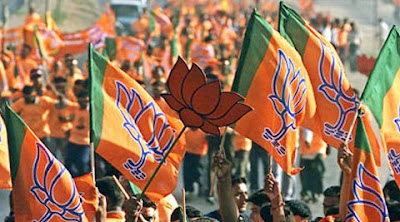 Very unfortunate day for the people of Jammu region who remained with BJP from last 70 years to see their party in power. But after remaining 67 years in opposition that D-day came in the history of J&K in the year 2014 when BJP -PDP government came into power and dream of lakhs of people who remained with Praja  Parshid to BJP came true. But in a short rule of present government, sympathisers as well as supporters of BJP have fed up due to poor governance, massive corruption and lack of vision for development of the Jammu region.

Now it is high time for BJP leaders who got ministerial berths to review their report cards. Public in itself feels that they have been deceived. As they all have broken all previous records​ of corruption. Transfer policy has been become the hub of corruption and  blooming corruption industry . Now in the prevailing situation, it's  time for overhauling in the BJP ministry and six most corrupt ministers  be change with yougesters and treat them as dead woods, so that the belief of lakhs of people of Jammu Region be  revived.

About the author: Shafqat Ramzan Wani is a freelance journalist from Pir Panjal.

Disclaimer: Authors' views are strictly personal  and do not in any way represent the views of Pir Panjal Post.