Pir Panjal Post November 05, 2018 J&K Pir Panjal
As a young Bakarwal confidently clears the huge flock of sheep and goat off the road to give your car an easy passage, you either hurl abuses at him for blocking your way for a few minutes or you watch in awe how lucky he is, to lead a life-always-on-the-move. While people who wind down the window-panes to catch a glance of the confused flock are few, most usually roll the panes up, for they find the smell too-suffocating, sitting comfortably in their vehicles. This sight is more common in April-May and September-October, for it is the time when Bakarwals start their journey from the plains, to the higher reaches and when they retreat back after treating their flock, with the sumptuous of grasses. 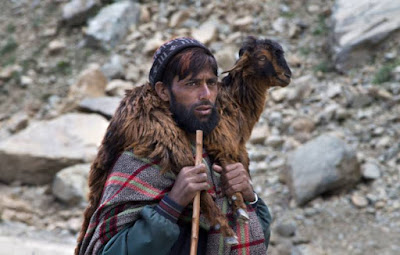 Bakarwals, along with their twins-Gujjars form the third largest community in the state of Jammu and Kashmir, after Kashmiris and Dogras. While Gujjars lead a largely settled life, the Bakarwals have a nomadic lifestyle. A portion of Gujjars also migrate to the higher reaches but they usually rear cattle, contrast to what Bakarwals rear; sheep and goats- their prized possession. But this life-on-the-move is not always a fairy tale, as we happen to imagine, looking at their pictures, in the most picturesque of places and in the most-colourful of clothes. 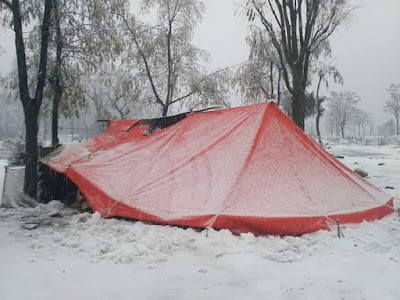 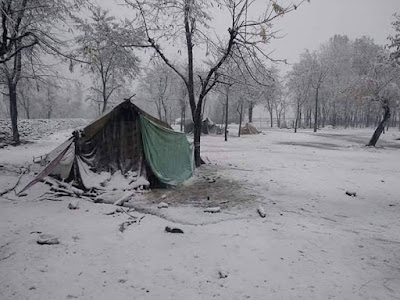 Early onset of winters create many hurdles for Bakarwals |Source

The beautiful places they pass through during their arduous journey cast hell-spell upon them, at times. Living under the open sky, with stars shining overhead, is not always safe. Halting near the gurgling stream is not a dream-come-true, but out-of-compulsion. Their children with lambs as toys instead of books are not a happy story. Their malnourished and overworked women also speak of a morbid tale. The tiffs and tussles on the way, with the locals and others, impact their emotional state too. They also often get trapped between the crossfire of army and militants. And on the top of it, the fury of nature makes their life difficult.

The lives of the Bakarwals have best been portrayed by ‘Shepherds of Paradise’ by Raja Shabir Khan. This documentary has covered the hard journey of Gafoor and his dera, and the hardships that came his way during the 200 miles journey, from the plains of Jammu to the higher reaches of Kashmir. 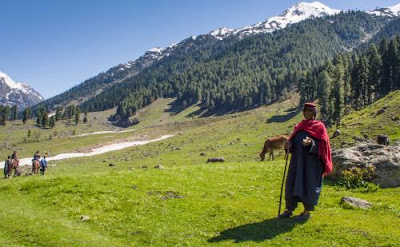 Nazir Hussain, another Bakarwal from Kalakote, whose family migrates to Gurez during summers, engrosses in some serious talk as he said, ‘We often lose our sheep and goats and also people in road accidents. Yet, that doesn’t knock down our morale and in the spirit of keeping our tradition alive, we do not even think of settling at one place permanently.’ His words echo deep as a speeding truck recently mowed down a shepherd and his flock of sheep and goats near Thopal in Ramban district of the state. The shepherd who lost his life, was all of twenty-nine. Earlier this year, a similar incident took place near Poshana along Mughal road in Poonch district, wherein more than 55 sheep were crushed. Increasing traffic is adding to their woes even as they are continuously being blamed for creating chaos on the road.

Moreover, due to the constant travelling, the children of the tribe drop out of schools. The Government of the state has provided mobile schools with teachers who accompany the Bakarwals and teach their children en-route the entire journey, yet it does little. Children largely help the huge herd of sheep and goats graze. They collect woods.  And in their own little ways, they ease a huge part of their responsibilities.  Their occupation with the books would make their lives more difficult. The short-run cost-benefit analysis further aggravates the problem of illiteracy among the tribe, bypassing the long-run benefits of education.  The result, generation-after-generation of Bakarwali children pose happily with their animal-companions; while their books and notebooks are used to pack groceries for the regular halts. 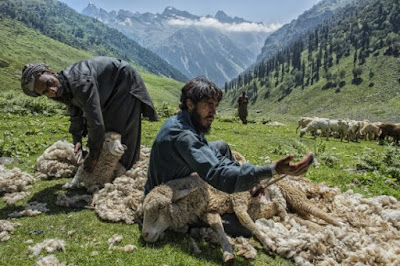 Bakarwals have always been the protectors of the forest but their traditional rights over forests are at risk. The forest-lands where they have been camping since ages have been fenced by the Forest department and their make-shift camps are damaged from time to time. Delay in the implementation of Forest Rights Act, 2006 speaks of the attitude of the government, towards this ethnic group. This law protects the traditional forest dwellers against forced displacements and in the absence of it, this group faces forced-displacements in the name of encroachments.

Their religious identity troubles them in areas, where Muslims are in the minority while owing to their tribal identity, they are looked down upon by the other Muslims particularly Kashmiris. The deras that have cattle especially cows in their caravans, also have started facing the brunt of Hindutva forces. Last year, a Bakarwal family of Reasi was attacked heartlessly, on suspicion of being cow-smugglers.  Their lives are at grave risk for they face eviction from Hindu-dominated areas too. The rape of nine-year-old Asifa in Hindu-dominated village of  Rasana to create fear among the Bakarwals, to force them to shift, has crossed all limits of morality and humanity.

The Bakarwali women are overworked. And this takes a toll on their lives. Often heavily pregnant women or new mothers have to take this difficult journey. Besides they have to perform numerous other tasks. They are malnourished and their children are left unattended or taken care of by elder siblings. Behind their strings of braids, lies a dark-reality that they do not have time even to comb their hair. A study by Showkeen Bilal Ahmed Gul reveals that the women of the tribe are completely unaware of the schemes that are launched by the government for their upliftment, from time to time. Their lives are at risk, safety at stake while they venture into deep forests to collect firewood or to graze their horses.

Since being listed in the Scheduled Tribes, the jobbed Gujjars and Bakarwals are regularly taunted and underestimated for being a reserved category. Often Bakarwala or Gujru or Gujjar is used as a slang for someone who is shabbily dressed or who speaks meekly or who is little aware of the world-happenings.  They have been facing this verbal onslaught since ages and perhaps that is why, they do not mingle much with others, keeping largely to themselves. 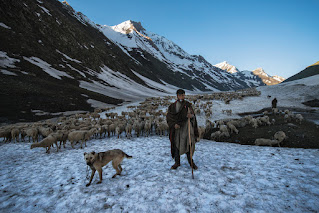 The gravest of disasters affecting them is nature. Being on the move, they often get trapped in heavy rains and snowstorms. With no shelter overhead, but thin plastic sheets, they are severely affected. Often in sheer-clothes and without any warm clothing and heating arrangements, children are the worst victims, losing lives to pneumonia and other cold-borne diseases. Sheep and goats die. Their deras often get buried under landslides triggered by incessant rains and also sudden-lightening causes severe loss to them.

Despite all this, Bakarwals would always carry a happy smile on their faces, cheerfully playing the flute or singing folk songs. But behind, lies years of hardships, which have strengthened them to bear not just the vagaries of nature, but also of fellow human beings. And despite these hardships, if you talk to them, they turn out to be the friendliest of all masses and amazing storytellers. All you need is to make the first move, talk.

About the author: Tazeem Akhter is currently working as Assistant Professor in Economics, BGSB University.