Pir Panjal Post September 21, 2017 Culture Education Politics Society Zed
Students of Aligarh Muslim University (AMU) are protesting against the university administration in pursuance to their demand for early elections to AMUSU. Vice Chancellor of the university, Dr Tariq Mansoor explained his position in the letter below. To which, Sharjeel Usmani, a student of BA Political Science  responded: 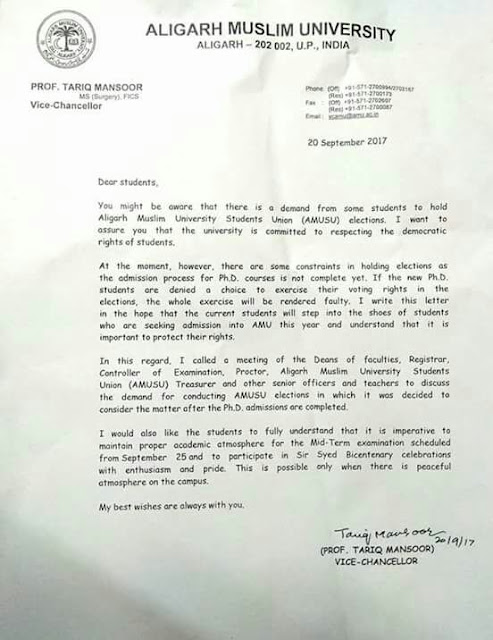 It was kind of you that you wrote to us, though this letter comes after fourth months since you’ve taken charge as the vice chancellor of Aligarh Muslim University. Oh! I am sorry but I almost forgot that you had made a few ‘promises’ when the previous students’ union made you a ‘life time member’ of the AMU students’ union. I won’t go on discussing the promises you made, but I am truly overwhelmed at your claim that you’re committed to respecting the democratic rights of the students.

Sir, the official website of our university states that you’re here as a faculty since last thirty-three years and you’ve served as an ‘elected’ member of the executive council of the university for twelve years before taking charge as vice chancellor. In all these years of your life in AMU, haven’t you been told about the Aligarh Muslim University Students’ Union Constitution which states that ‘the elections of the students’ union shall be held with 75 days of the commencement of new academic session’ or the Lyngdoh committee guidelines which states that elections shall be held within first 6-8 weeks of the new academic calendar?

I remember that when UGC sent you a notification of organizing live streaming of PM Narendra Modi’s lecture on September 11, you were very eager to organize it. The live streaming of Narendra Modi’s lecture was organized in the ZHCET Hall. Moreover, you travelled to Delhi to attend that lecture along with Indresh Kumar of Rashtriya Swayamsevak Sangh. You organized the lecture on UGC’s small notification which was hardly important as far as academics or an academic institution is concerned. Though you’re reluctant to conduct elections which is not only important but also is an essential element of our democratic campus.

You chose the dates of Mid-Semester Examination knowing that you had to conduct the election within 75 days. You started procedures of PhD admissions knowing that you had to conduct election within 6-8 weeks. Who’s at fault, you or us? It is you, definitely! Moreover, this year we are going to celebrate the 200th birth anniversary of Sir Syed Ahmad Khan. In case you don’t know, the current students’ union was formed by Sir Syed Ahmad Khan himself in 1884 and it was then called as ‘Siddons Debating Club’. How unfair it would be on our part that we celebrate this bicentenary celebration without this union?
Therefore, I request you conduct the elections before Sir Syed Day and ‘respect’ our democratic rights.

Sharjeel Usmani is a student of BA political science at AMU

Disclaimer: The views of the author are strictly personal and do not in anyway represent the views of Pir Panjal Post